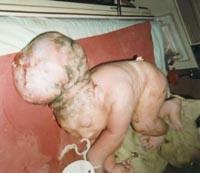 A British government official said Friday that terrorist attack with "dirty bombs," which scatter radioactive material, is a serious threat for Britain.

"If you look at the nature of the sort of attacks that have either been carried out or have been foiled, we are talking about attacks on crowded public places," Home Secretary Jacqui Smith said in an interview with Sky News.

"We are talking about the use potentially of dirty bombs and other things and that's why it is something that we need to take seriously."

Concern about a "dirty bomb" attack grew following arrests on Wednesday in Hungary and Slovakia of two Hungarians and a Ukrainian who allegedly were trying to sell half a kilogram (1 pound) of uranium in powder form.

The government says Britain's risk of terrorist attack is "severe," meaning that it believes an attack is highly likely.

The threat warning has been at that level since July, when it was downgraded from "critical." The higher level was prompted by failed car bomb attacks in London and Glasgow, Scotland.