Fourteen Tamil Tiger rebels were killed in a series of government forces attacks against the separatist group across northern Sri Lanka. 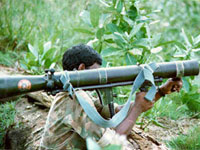 The fighting, part of an escalation in violence between the two sides in recent months, came amid a security clampdown on the capital, Colombo, following a pair of rebel bombings that killed 20 people.

The military released security camera footage Friday showing one of the attacks, a suicide bombing at the Colombo offices of a Cabinet minister that killed one person as well as the bomber.

In the footage, the female bomber is seen patiently sitting in a chair on the other side of an official's desk in what appears to be a waiting room as people mill about around her. The bustle of the office quickly turns into a chaotic dash for safety when the woman detonates the bomb, which police say was hidden in her bra.

The bombings demonstrate how the rebels were suffering under a government offensive against their stronghold in northern Sri Lanka, security officials said.

"They were desperate and unable to face the security forces in the north," military spokesman Brig. Udaya Nanayakkara said.

On Thursday, troops killed four guerrilla fighters in a battle near the rebels' stronghold in northern Sri Lanka, the military said Friday. Four others were killed in two separate battles in the region.

Soldiers killed six other rebels, also on Thursday, in three separate clashes in the Vavuniya district, just south of rebel-controlled territory, the military said in a statement.

The Tamil Tigers have been fighting since 1983 to create a separate homeland for Sri Lanka's minority ethnic Tamils following decades of discrimination by governments controlled by the Sinhalese majority.

The group, branded a terror organization by the U.S. and European Union, is responsible for more than 240 suicide bombings as well as scores of other deadly attacks.

Rebel spokesman Rasiah Ilanthirayan, who has not answered repeated calls from The Associated Press since the latest bombings Wednesday, could not be reached for comment on the new fighting.

The death toll from the worst of the bombings - at a department store in a Colombo suburb - rose to 19 Thursday as two of the injured died from their wounds, security forces said. The earlier bombing at the Colombo offices of Social Services Minister Douglas Devananda killed one person, but left the minister unharmed.

U.N. Secretary-General Ban Ki-moon condemned the rebel attacks and called on both sides to return to peace talks. The U.S., in its condemnation of attacks on civilians, said "only a political solution, not a military one, offers a way out of the current cycle of escalating violence."

The European Union called on both sides to avoid civilian casualties.

Fearing the attacks Wednesday were only the first in a wave of bombings, the government canceled school for the rest of the week. It also cut train service from the northern town of Vavuniya to the capital in the belief that rebels were using the route to infiltrate Colombo.

The military, which already maintained a maze of checkpoints throughout the capital, sent more forces into the streets, and intelligence agencies were directed to redouble their efforts to prevent more attacks, government spokesman Keheliya Rambukwella said.