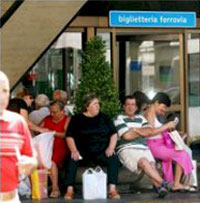 Air One, Italy's No. 2 carrier, said only nine flights would be guaranteed during the protest. The strike also affected foreign airlines, with British Airways canceling at least 16 flights.

Transport workers are protesting the scarcity of funds in the new budget as well as the declining fortunes of the main companies in the sector, starting with money-losing Alitalia, which the Italian government is struggling to sell.

Railway company Trenitalia canceled hundreds of trains and warned of further delays as rail workers walked off their jobs at 9 a.m. (0800 GMT) for an eight-hour protest.

Many travelers who did reach Rome's central station had to lug suitcases on foot as the subway shut down and more than 70 percent of the capital's buses remained idle.

Local transportation walkouts were scheduled to last for eight hours at different times in cities across Italy, and with cabs at a premium many commuters tried to reach work in their own cars.

The city of Rome avoided further chaos by closing a late-night deal Thursday with taxi drivers who for two days staged wildcat strikes and traffic blockages to protest plans by city officials to grant 500 new licenses. The city did not go back on its plans but agreed to discuss with unions how and when the new licenses will be released.