Fred Goldman sues a file sharing Web site for making O.J. Simpson's book "If I Did It" available for free downloads. 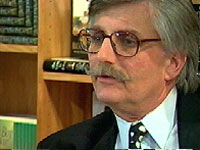 Goldman, who has the rights to the book, claims he has lost at least $150,000 (Ђ101,778) in damages ever since the popular Swedish site The Pirate Bay posted the book, according to the lawsuit filed Thursday in Los Angeles County Superior Court.

Although Goldman's attorneys have sent a letter demanding the Web site's operators stop posting the book, the defendants have indicated "they are not subject to the laws of the United States," the lawsuit said.

The lawsuit seeks to recover profits from the "illegal publication" and suggests The Pirate Bay receives advertising money from such American companies as Wal-Mart, Target, Jamster and The Wall Street Journal.

"It's the wealth through the advertising" that allows the site to remain, Goldman attorney David Cook said.

"Ron Goldman LLC will never be able to stop these pirates from posting that book online but they can do that in the poorhouse," Cook said.

A call to The Pirate Bay was answered by a recording and the Web site was temporarily offline Thursday.

Goldman won the rights to the book in his ongoing legal battle against Simpson, who was acquitted in a criminal trial of the 1994 murders of Goldman's son, Ron, and Simpson's ex-wife Nicole Brown Simpson. After their families sued for wrongful death, a civil court jury found Simpson liable for the killings and ordered that he pay $33.5 million.

Simpson has paid little of the judgment, which has risen to about $39 million (Ђ26.46 million) with interest, so Fred Goldman has been going after some of the former football star's assets.

He recently won the rights to the book "If I Did It," a supposedly fictional account of how the murders were committed. The book was retitled "If I Did It: Confessions of the Killer" and became a New York Times best-seller.

With a court having earmarked 90 percent of the book's royalties for Goldman, he could eventually win a substantial sum.