A new archbishop of Munich-Freising was named on Friday. Pope Benedict XVI once held that position. 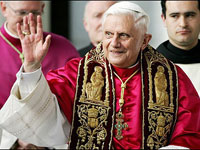 Reinhard Marx, 54, currently the Bishop of Trier in western Germany, will take over the country's No. 2 Roman Catholic diocese, which serves most of the largely Catholic southern state of Bavaria, Munich Cardinal Friedrich Wetter announced.

Marx, who is also the head of the committee for social issues at the German Bishops' Conference, will replace Wetter, who is nearly 80 years old.

Wetter said he was not sure yet when Marx would take over his office but he would visit him soon to talk about all the details.

Benedict - then still Joseph Ratzinger - was born in the Munich-Freising Diocese and served as archbishop of Munich from 1977-1982, before he was called to Rome and Wetter was named to replace him.

"I perceive it as a big honor to get appointed to his home diocese," Marx said of Bendict's decision.