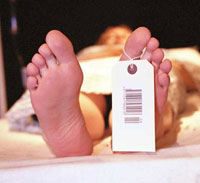 Authorities said the preliminary physical description of the body found Thursday about 50 miles east of El Dorado matches that of Emily Sander, who was last seen leaving a bar here a week ago with a man who stayed in a motel room where police found large quantities of blood.

Investigators refused to give details about the state of the body or how it was found. Police Chief Tom Boren said the cause of death was not yet known. An autopsy was planned for Friday.

Sander's case drew wide attention after it was revealed that she appeared nude on a popular adult Web site under the name Zoey Zane.

The 18-year-old Butler Community College student was last seen Nov. 23 with Israel Mireles, 24. Authorities are looking for him and his 16-year-old pregnant girlfriend.

The rental car the pair were driving was found abandoned Tuesday in Vernon, Texas, where Mireles has relatives.

"We got no information from them at all and very little cooperation," Boren said of Mireles' family.

The search for Sander gripped this small community, and the apparent discovery of her body left only memories to comfort her friends and family.

Former boyfriend Michael McAllister, 20, said Sander moved in with him when she was 17.

"It was the best time of my life, and I hope it was the same for her," McAllister said.

He helped her finish high school, and she encouraged him in college. They bought pink and white Denver Broncos jerseys for themselves and their dog, Zan, that they wore on game days. She loved to dance to hip-hop music.

"She wanted to choreograph music videos. That is the only reason she did the Internet thing _ to get a little exposure," McAllister said.

They broke up in September after she started posing for nude photos, he said.

The body was found as searchers on foot and all-terrain vehicles were checking the tall grass along each side of a highway as they traced the route Mireles may have taken Saturday on the way to Baxter Springs to pick up his girlfriend.

Sander's grandmother, Shirley Sander, said the discovery of a body would "very definitely" bring closure to the family.

"We had to know one way or another," she said in a telephone interview.