President Hamid Karzai claimed that Osama bin Laden's recording posted on a Web was "ridiculous". The message denounced the U.S. invasion of Afghanistan and accused foreign troops of killing civilians. Hamid Karzai in turn blamed the al-Qaida chief for causing mass bloodshed in his country. 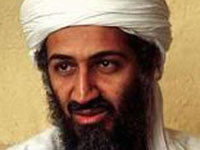 "Osama bin Laden is the main reason that terrorism befell Afghanistan after the end of the Cold War, and caused the deaths of thousands of innocent Afghans," a statement for Karzai's office said Friday.

In a recording posted on a Web site on Friday, bin Laden said it was unjust for the U.S. to invade Afghanistan for sheltering him after the Sept. 11, 2001 attacks.

He said the war was "waged against the Afghans without right," and that foreign troops have not followed the "protocol of warfare," resulting in civilian deaths.

He urged Europeans to force their governments to pull their soldiers out of Afghanistan.

Karzai said bin Laden "has no right to make any comments about Afghanistan" and gave Muslims all over the world a "bad name."

"Afghan people are some of the most religious people in the world and they know that Osama bin Laden's actions are not legitimate and are un-Islamic."