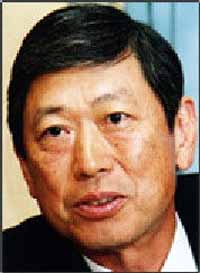 Japan’s foreign minister arrived in Beijing on Friday to try to establish a channel for resolving trade issues ahead the two-week economic negotiations.

The two countries exercise overlapping claims to economic zones extending 370 kilometers (230 miles) from their shores as allowed under the U.N. Convention on the Law of the Sea. Eleven rounds of talks have failed produce any kind of agreement; the United Nations has until May 2009 to rule on the matter.

A territorial dispute over a group of islands surrounded by rich fishing grounds - known as the Diaoyu Islands in China, called Senkaku in Japan - brought "emotional issues" to the table, Sakaba said.

"We should be imaginative to find some way which is acceptable for both sides," he said. There were several proposals on the table, but Sakaba refused to elaborate, citing the sensitivity of the talks.

Top officials will also join in discussions at what Japan hopes will be a series of bilateral ministerial-level economic forums, being held on Saturday and Sunday in Beijing. The sides planned to discuss trade, investment, copyright protection, and Japanese concerns that China's currency, the yuan, is undervalued, making its exports unfairly cheap.

Japan was also keen to discuss energy efficiency and projects to help China tackle air pollution and other environmental issues that are increasingly felt across the sea in Japan. Industries in China are notorious for their inefficiency, requiring more coal or other energy sources to produce the same amount of output as a plant in Japan.

China, including Hong Kong, is Japan's No. 1 trading partner and Japanese companies are eager for access to Chinese consumers and labor. But the private sector in Japan was concerned over what they perceived to be a more selective approach by Beijing in agreeing to foreign investment deals.

Komura's trip comes amid a strengthening detente between the sometimes antagonists, with a Chinese naval vessel this week making the first visit to Japan by the People's Liberation Army since World War II.

The rapprochement has been aided by the accession of Japan's new Prime Minister Yasuo Fukuda, a relative moderate who appears inclined to hear concerns from the business community that confrontation with Beijing harms Tokyo's economic interests.

The East China Sea gas dispute has been among several irritants in ties, although relations have improved vastly since anti-Japanese riots broke out in several Chinese cities in 2005.