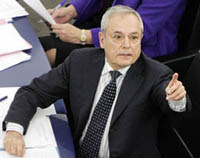 The EU's executive office, the European Commission is conducting the negotiations with Ottawa on behalf of the 27-nation bloc.

It follows a similar deal with the United States.

EU governments in October approved launching the talks, and a first round of negotiations was held this week in Brussels.

An "open skies" deal would scrap many market restrictions for airlines and set common regulatory standards for safety and security.

It would replace 19 bilateral air services agreements between Canada and EU nations - in line with a 2002 court ruling that said an EU pact must replace individual deals, "restoring legal certainty" for airlines, the commission said.

The EU said a deal with Canada would create "significant benefits" for consumers and industry. It pointed to an EU study which found that the number of passengers between EU and Canada could nearly double to 14 million by 2011, from 8.7 million this year.

The pact could also lead to EUR72 million (US$106 million) in savings for consumers because of lower fares and increased competition on EU-origin flights to Canada.

The EU has already reached a similar deal with the United States. That deal will allow airlines to fly from anywhere in the EU to any point in the U.S. and it will take effect March 30 - five months later than originally planned after Britain won a demand for extra time before opening up London's Heathrow, the EU's busiest airport.