A Bedouin woman was arrested Friday in the eastern Sinai Peninsula. She had tons of explosives hidden under her house. 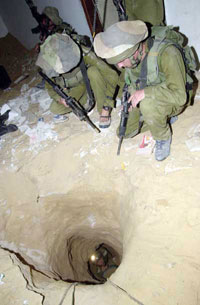 The munitions seized in al-Takadom village included some 350 kilograms (770 pounds) of explosives and eight rockets, said the official, speaking on condition of anonymity because he was not authorized to talk to the media.

Police found the explosives a day after they discovered two tunnels on the other side of the Sinai Peninsula in Rafah, just a few meters from Egypt's border with the Gaza Strip, the official said.

The two shops were closed a long time ago, and the police made no arrests, the official added.

Smuggling across the border into Gaza or Israel has long provided a livelihood for some Bedouins in Egypt's Sinai Peninsula .

Weapons, cigarettes and foreigners seeking jobs in Israel are all taken surreptitiously across the border.

Israel has repeatedly accused Egypt of not doing enough to stop weapons smuggling into Gaza, particularly through tunnels. Cairo recently said it would make a greater effort to stop smuggling.