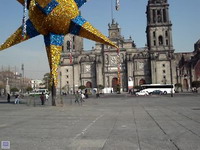 In a letter released Friday by the church, the Latin American Episcopal Council asked Cardinal Norberto Rivera to reopen the cathedral so that "Mexico's faithful can use it."

"The interruption in the cathedral went against Mexican culture and the church," the letter said. The letter called the pretext for closing the cathedral "totally absurd."

The letter was released as eight Mexican bishops met to decide whether to reopen the world-renowned building on Mexico City's central Zocalo square. No decision was announced.

Rivera said Sunday that the cathedral doors would remain shut until city officials could guarantee the building's security.

Mexico City's leftist mayor, Marcelo Ebrard, increased security at Rivera's request weeks ago after several smaller protests were held in the cathedral. However, Sunday's demonstrators were able to get past police, scaring away churchgoers and overturning pews.

The protesters said they were angry that the cathedral's bells tolled longer than normal, drowning out a speech during a rally in favor of former leftist presidential candidate Andres Manuel Lopez Obrador, who claims conservative President Felipe Calderon robbed him of last year's presidential elections.

Church officials said the call to Mass was routine and not designed to interrupt the rally.

Rivera, fed up with the continuing protests, then closed the cathedral for the first time since 1926, when tensions over Mexico's harsh anti-clerical laws broke out into armed conflict between the government and Catholic rebels with the bloody 1926-29 Cristero War. All Mexican churches were closed during the conflict.

Ebrard promised on Monday to assign a special security unit to the cathedral and install security cameras around and inside the building, and officials from Mexico's lefist Democratic Revolution Party have publicly condemned the scuffle.