Three Russian divers who went missing in the Red Sea waters three days ago are still not found. 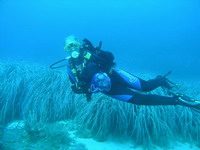 The three Russians went missing Wednesday while diving at the Elphinstone Reef, southeast of the resort of Marsa Alam in Egypt's Red Sea, said Alaa El Din Abdelgeleel of the Red Sea Association for Diving and Water Activities.

"Chances of finding the three Russian divers alive now are poor, especially since they have been missing for about three days without being seen floating," Abdelgeleel told The Associated Press.

In Moscow, Russia's RIA Novosti news agency said a total of 11 vessels were involved in the search for the Russians.

Abdelgeleel said helicopters were also taking part in the search, as were many volunteer divers, but that the rescue mission was hampered by poor weather, strong winds and high waves.

He said his dire predictions were further compounded by the area's "strong underwater currents."

It cited a fourth member of their group as saying the trio planned to dive at the Elphinstone Reef to a depth of 90 meters (295 feet), which is against the law.

Diving deeper than 40 meters (131 feet) is not permitted in Egypt.

Abdelgeleel said that a helicopter hired by Doronina's husband had searched the area Friday from dawn to dusk failed to find any signs of life of the three.

The Egyptian official said the fourth diver had started out with the three Wednesday, but returned to the surface on his own after reaching 35 meters (115 feet).

RIA Novosti quoted Irina Tyurina, of the Russian Union of Travel Industry, as saying the incident was rare and that the three were highly skilled divers who sought to set a record by diving to a depth of 90 meters using an ordinary air mixture.

"This causes the so called 'rapture of the deep', or nitrogen narcosis - an alteration in consciousness similar to drug intoxication," she was quoted as saying.

On Jan. 5, a Russian died while diving off the Red Sea popular resort of Dahab. Two days later, two other Russian divers and an Egyptian scuba diving instructor disappeared while exploring a coral reef near Marsa Alam. Another Russian was found dead Jan. 16 near the shore at Ras Mohammed, a resort on the southern tip of the Sinai peninsula.