US firefighters trained to look out for terrorism

Firefighters are given a new role as lookouts for terrorism, raising concerns of eroding their standing as trusted American icons and infringing on people's privacy. 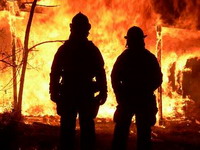 US firefighters trained to look out for terrorism

Unlike police, firefighters and emergency medical personnel need no warrants to enter hundreds of thousands of homes and buildings each year, which puts them in position to spot behavior that could indicate terror activity or planning.

There are fears, however, that they could lose the faith of a skeptical public by becoming the eyes of the government, looking for suspicious items like building blueprints or bomb-making manuals or materials.

Since the Sept. 11, 2001, terror attacks, Americans have surrendered some privacy rights in an effort to prevent future strikes. The government monitors telephone calls and e-mails; people who fly have their belongings searched before boarding and are limited in what they can carry; and some people have trouble traveling because their names are similar to those on terrorist watch lists.

The American Civil Liberties Union says using firefighters to gather intelligence is another step in that direction. Mike German, a former FBI agent who now is national security policy counsel to the ACLU, said the concept is dangerously close to the Bush administration's 2002 proposal to have workers with access to private homes, such as postal carriers and telephone repairmen, report suspicious behavior to the FBI.

The Homeland Security Department is testing a program with the New York City fire department to share intelligence information so firefighters are better prepared when they respond to emergency calls. Homeland Security also trains the New York City fire service how to identify material or behavior that may indicate terrorist activities. If it is successful, the government intends to expand the program to other major metropolitan areas.

As part of the program, which started last December, Homeland Security gave secret clearances to nine New York fire chiefs, according to reports obtained by The Associated Press.

Even before the federal program began, New York firefighters and inspectors had been training to recognize materials and behavior the government identifies as "signs of planning and support for terrorism."

When going to private residences, for example, they are told to be alert for a person who is hostile, uncooperative or expressing hate or discontent with the United States; unusual chemicals or other materials that seem out of place; ammunition, firearms or weapons boxes; surveillance equipment; still and video cameras; night-vision goggles; maps, photos, blueprints; police manuals, training manuals, flight manuals; and little or no furniture other than a bed or mattress.

"We're there to help people, and by discovering these type of events, we're helping people," said New York City Fire Chief Salvatore Cassano. "There are many things that firefighters do that other law enforcement or other agents aren't able to do." He added, "A normal person that doesn't have this training wouldn't be looking for it."

Cassano would not discuss specifics, but he said some terror-related information has been passed along to law enforcement since firefighters and officers began the trainingthree years ago. "They've had some hits," Cassano said. "It's working."

Separately, the fire services in Washington, the nation's capital, Phoenix, Arizona, and Atlanta, Georgia, also have received terror-related intelligence training. Los Angeles County provides intelligence training so firefighters and inspectors can spot dangerous chemicals or other materials that could be used in bombs. And the fire service is also represented in at least 13 state and regional intelligence "fusion" centers across the country, where local, state and federal agencies share information about terror and other crimes.

In Washington, the fire service made its first foray into the intelligence world about two years ago, and now District of Columbia Fire/EMS has access to the same terrorism-related intelligence as the police, said Larry Schultz, an assistant fire chief in charge of operations.

D.C. firefighters and Emergency Medical Service providers are in 170,000 homes and businesses each year on routine calls, Schultz said.

"So we see things and observe things that may be useful to law enforcement," he said. "We can walk into your house. We don't need a search warrant." If an ambulance team should show up at a house and see detailed maps of the district's public transit system on the wall, that is something the EMS provider would pass along, he said.

"It's the evolution of the fire service," said Bob Khan, the fire chief in Phoenix, which has created an information-sharing arrangement between the fire service and law enforcement through terrorism liaison officers.

Because firefighters are on the front lines, the fire service needs to know about intelligence that could somehow affect what they do, said Gregory Cade, who as head of the U.S. Fire Administration is the nation's top fire chief.

If, for example, Washington is hosting an International Monetary Fund meeting where there will be a large group of protesters and a truckload of gasoline has been stolen in Baltimore, firefighters need to know about intelligence from overseas that terrorists are trying to make explosive devices out of gasoline, Schultz said.

"Getting appropriate, actionable intelligence is important for a fire chief in deciding what to do and how to allocate resources and to know what's going on," Cade said. "No one is expecting us to be the analyst person who is sitting down, trying to connect all of this stuff together and determining, `Oh, yes, this looks like a terrorist plot."'

But Cade said that until recently, there has been no mechanism for fire departments to share what they learn with law enforcement and intelligence analysts who could use it.

"If in the conduct of doing their jobs they come across evidence of a crime, of course they should report that to the police," said the ACLU's German. "But you don't want them being intelligence agents."

It's of particular concern for communities already under law enforcement scrutiny. "Do we want them to fear the fire department as well as the police?" German asked.

The Detroit, Michigan, area, which has one of the largest concentrations of Arab-Americans in the country, does not conduct this type of intelligence training, nor does it plan to. "That's a touchy area," said Detroit's deputy fire commissioner, Seth Doyle. Detroit firefighters receive training about hazardous materials, but not the details New York and D.C. firefighters are now on the lookout for.

A structural diagram of the Ambassador Bridge linking Detroit and Windsor, Ontario, materials and literature to make a bomb and a bomb prototype are things firefighters should pay attention to, Doyle said. But the bridge diagram by itself might not be enough. "I don't want our folks to be put in a position where they're reporting something that creates a situation where there was really no real problem in the first place," Doyle said.