An Iraqi agent who defected from Saddam Hussein's regime and sought asylum in Sweden was killed in 1985. Police have arrested a 57-year-old man suspected of involvement in the murder. 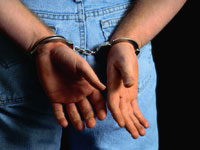 The Stockholm district court on Friday ordered the suspect - a Swedish citizen of Iraqi origin - held in jail while prosecutors prepare possible charges. He could not be named under Swedish privacy rules.

Police arrested the man earlier this week in what investigators hoped was a long-awaited break in their investigation into the murder of Majid Hussein.

Under Swedish law, prosecutors have two years remaining to start any legal proceedings because of the lengthy period since the crime.

Hussein, whom Swedish media described as a former Iraqi agent who fled to Sweden, is believed to have been murdered in a Stockholm hotel room on Jan. 9, 1985. His dismembered body was found in two suitcases outside the Swedish capital two months later.

An Iraqi woman who used the name Jamila El-Chafej has been wanted in the case since the 1980s.

The man detained this week is suspected of helping El-Chafej lure Hussein to the hotel room, knowing that he would be killed there, prosecutors said.

Authorities did not say how they found the suspect, but Sweden's security police, SAPO, last month called for public help in solving the case.