The Lebanon national army stands as the last line of defense against greater turmoil as presidency vacant and its politics in chaos. 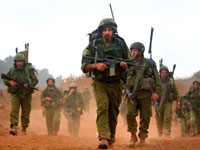 But there are questions over how long the military can hold the fort amid this nation's deep political and sectarian divisions.

So far, the 56,000-member military has successfully kept this tiny and fractious country together, surviving one crisis after another since the February 2005 assassination of former Prime Minister Rafik Hariri, which opened a new chapter in Lebanon's violent history.

But with the country facing a protracted, open-ended crisis after Parliament failed Friday to elect a successor to President Emile Lahoud - which many fear could throw Lebanon into a new civil war - the question now is how long the under-armed and over-stretched army can continue to hold?

Retired Lebanese army general Elias Hanna says conditions today are different from what they were at the onset of the 1975-90 civil war, which pitted Christians against Muslims, when the military splintered along sectarian lines, units fighting units and armories looted by militias.

The prominent expert said there is now consensus among rival politicians over the army's peacekeeping role.

"Today we have a political vacuum, and it is in nobody's interest to have a security vacuum as well," Hanna said.

"Politicians from both camps agree that at least one government institution - the army - must remain intact until an adequate political solution is found," said Hanna, who also teaches political science at Lebanon's Notre Dame University.

But the army faces a tough challenge maintaining the peace in the coming days and weeks, particularly amid the sectarian-charged atmosphere and persistent reports of proliferation of small arms among individuals as well as political parties.

In the past two years, the army has protected and separated between pro- and anti-Syrian groups, maintained order during angry protests and funerals, emerging as a neutral force working for the national good. In January, the army imposed a curfew to quell Shiite-Sunni clashes that killed 11 people.

During last year's war between Israel and Lebanese Hezbollah guerrillas, scores of soldiers were killed, and when the war ended, the army deployed along the tense southern border with Israel for the first time in nearly 30 years.

The army's victory this summer over Islamic extremists who had barricaded themselves in a Palestinian refugee camp in northern Lebanon earned it wide popularity among the country's various religious sects and political factions although the three-month battle sapped resources and killed 168 soldiers.

The army has been put in charge of internal security across the country even before Lahoud left office. Soldiers have been on alert for the past several days, units deployed to guard government buildings and major roads.

All sides have expressed confidence in the army's ability to take control of the situation on the ground.

Lahoud said this week that the Lebanese "are pinning great hopes on the role of the army and feel safe in its presence." His rival, Prime Minister Fuad Saniora, too, has expressed confidence in the military "for its commitment to implementing law and order and the importance of its role in keeping the peace and protecting, state institutions and the freedom of citizens."

Army commander Gen. Michel Suleiman himself has ordered his soldiers to ignore the politics and "listen to the call of duty." He has also said the army will "fully carry out its national and security role to protect the achievements that have been made."

Hanna said the army has shown great responsibility and resiliency in the past two years, and expected it to continue doing its job "as long as the players, both local and regional, have an interest in that."

He said only major sectarian violence over an extended period of time, such as a possible Sunni-Shiite confrontation, could potentially affect its performance.

"Then it will start to fracture," he said.