Herbert Saffir, a creator of the five-category system to describe intensity for hurricanes, has died at the age of 90 from complications of surgery. 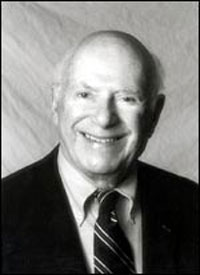 A structural engineer, Saffir created his scale in 1969 laying out for the first time what kind of damage could be expected from an approaching hurricane. It has since become the definitive way to describe intensity for storms that form in the Atlantic and parts of the Pacific. Before the scale, hurricanes were simply described as major or minor.

Saffir's innovation was ranking storm destruction by type, from Category 1 where trees and unanchored mobile homes receive the primary damage to Category 5 the complete failure of roofs and some structures. The five descriptions of destruction were then matched with the sustained wind speeds producing the corresponding damage.

Saffir's scale was expanded by former National Hurricane Center director Robert H. Simpson and became known as the Saffir-Simpson scale in the 1970s. The scale is now so well known that many coastal residents toss off shorthand like "Cat. 1" and few need to be told that it refers to Saffir and Simpson's creation.

Simpson said the system helped him communicate the power of an approaching storm.

"We had a lot of requests before the scale: how many resources of what kind would be needed to deal with the storm," Simpson said. "I couldn't tell the Salvation Army, for example, how much and what materials they should be shipping. The scale gave them a much better handle on that."

Simpson added possible storm surge heights for each category, and the hurricane center staff made a small adjustment to the scale's wind speeds. Simpson, 95, now lives in Washington, D.C.

Saffir was born in New York in 1917. He graduated from Georgia Tech with a degree in civil engineering in 1940 and then served in World War II, later moving to South Florida to become a county engineer.

Because of the area's vulnerability to hurricanes, Saffir quickly became an expert in how hurricane-force winds affect buildings. He helped write and unify building codes in South Florida.

Saffir began working on an intensity scale in 1969 as part of a United Nations project. He had been asked how the U.N. could lessen hurricane damage to low-cost buildings worldwide. To help officials understand the full range of hurricane damage, Saffir proposed rating storms from one through five. Scales for rating earthquake damage were already well known, and Saffir believed hurricanes needed their own system of ranking.

He presented his system to Simpson, who began to use the rankings internally and later for a weather report meant largely for emergency agencies. The scale was so useful, however, others quickly adopted it.

It was later used for public hurricane forecasts, making the pair's names synonymous with the Atlantic hurricane season.

For storms that originate in the Pacific Ocean, called typhoons, a five-point scale is also used, but it is based on wind gusts, not sustained winds.

While Saffir became known for the scale, he continued to work as a structural engineer at his Coral Gables office past his 90th birthday. He also traveled to inspect storm damage, even producing reports on the performance of structures during 2005's Hurricane Katrina.

Saffir's wife, Sarah, preceded him in death. He is survived by two children, Richard and Barbara.

Despite devoting much of his life to thinking about and preparing buildings for hurricanes, Saffir acknowledged earlier this year that his own home was not completely protected from a storm with hurricane shutters. He had done studies on the glass in the windows and found it was relatively shatter-proof, he said. At the same time, he told The Associated Press, "I confess I only have partial shutters."