Prince Charles has great success in Uganda. He hopes to charm the Commonwealth as well. 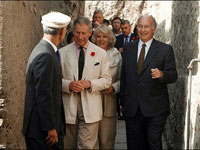 Charles' mother, Queen Elizabeth II, is head of the 53-nation Commonwealth of Britain and its former colonies. Charles is heir to the throne - but not necessarily to leadership of the group. Some question whether he commands the popularity and respect to hold together one of the world's most diverse international alliances, whose member nations are home to almost 2 billion people on five continents.

Charles is on a three-day visit to Uganda, coinciding with his mother's trip to the Commonwealth summit that opened Friday in the capital, Kampala.

Officially, he is here at the invitation of Ugandan President Yoweri Museveni, one in a regular series of visits to charitable projects in Commonwealth countries.

Charles also is attending some events at the summit - the first time the prince has attended the biennial meeting when it has been held outside Britain.

"There is no secret that the Prince of Wales (Charles) would love to follow the queen in the symbolic role as the head of the Commonwealth, but he really doesn't know many of the prime ministers of these countries, the 53 nations that make up the Commonwealth," said Judy Wade, royal correspondent for Hello! magazine.

"I think that he is here so that he can start a charm offensive and sort of persuade them that he is the right man to take on the queen's role one day," Wade told Associated Press Television.

Royal officials have dismissed as speculation reports that Charles' visit means the 81-year-old monarch is preparing to hand over some of her foreign duties to her son.

While British monarch is a hereditary position, head of the Commonwealth is not. Officials say a replacement for the queen would be decided by the group.

Although the queen is head of the whole Commonwealth, she is head of state in only 16 of its countries, including Britain, Canada and Australia. But she is widely respected by Commonwealth leaders.

The 59-year-old prince is less well known - though he is winning new fans on this trip.

The prince was greeted by large and enthusiastic crowds Friday as he visited a water project, a group of former prostitutes retraining as hairdressers and a children's soccer league. He even kicked a ball with the children.

At times, his way was almost blocked by thick crowds of well-wishers as he walked through the crowded Kawempe slum district.

Shopkeeper Maureen Kanjeyo joked that she was going to rename her provisions shop King Charles Store after Charles dropped by.

"I am very happy, very proud," Kanjeyo told Britain's Press Association news agency. "I have never had a prince in here before."