US man tears woman's finger off while allegedly stealing her purse 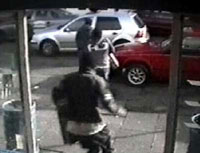 US man tears woman's finger off while allegedly stealing her purse

A U.S. man tore a woman's finger off her hand while allegedly trying to pinch her purse.

Caesare R. Pinkins, 21, was charged with multiple felony counts of robbery and aggravated battery in connection with the Wednesday afternoon incident.

Pinkins allegedly drove up alongside a woman in a supermarket parking lot in Lilburn, a suburb about 25 miles (40 kilometers) northeast of Atlanta. He then allegedly snatched her purse and accelerated, said Gwinnett Police Cpl. Illana Spellman.

"As the suspect drove away, one of the victim's fingers was pulled off," said Spellman.

Surgeons were unable to reattach the severed finger.

Pinkins is being held without bond in jail.