Over 150 people rescued after cruise ship hits object in Antarctica

A cruise ship hit an iceberg or some other object in Antarctic waters, over 150 passengers and crew took to lifeboats and were rescued. 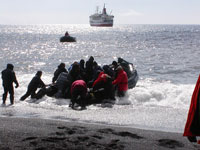 Over 150 people rescued after cruise ship hits object in Antarctica

A fist-sized hole was punched in the hull of the MS Explorer when it struck an object before dawn in frigid waters near the South Shetland Islands and Graham Land, an Antarctic peninsula, the British Coast Guard said.

On calm seas, the passengers and crew were safely moved aboard a Norwegian cruise ship, according to Susan Hayes, a representative of Gap Adventures, operator of the tour aboard the Explorer.

"Everyone is safe and accounted for, both the passengers and crew," Hayes told The Associated Press by telephone.

Gap Adventures representative Marie Ann Macrae said there were 154 people aboard the ship, including 91 passengers from 14 countries. Twenty-three British passengers dominated the list, followed by 17 Dutch, 13 Americans and 10 Canadians.

Passengers and crew were moved aboard the MS Nordnorge.

The ship was shown listing heavily to one side in aerial photographs released by the Chilean air force.

It was unclear whether the abandoned vessel would sink, British Coast Guard Fred Caygill said.

"We believed it has been hulled, it has a hole the size of a fist and some cracking in the hull of the ship, it's taking water and it's listing about 21 degrees," Caygill told AP Radio. "There has been some information coming back that it may have hit an iceberg but it has not been confirmed."

"Latest reports are that all persons are safe and accounted for," said British Coast Guard spokesman Fred Caygill said from Falmouth, England.

Capt. Juan Pablo Panichini, an Argentine navy spokesman, said its rescue and command center received a predawn distress call from the crew saying that the ship had begun taking on water in some compartments, despite efforts to use onboard pumps.

A navy statement said the captain ordered passengers to abandon the ship less than two hours after the first call and that passengers and crew took to eight semi-rigid lifeboats and four life rafts. The captain and first officer later departing the ship.

The Explorer was traveling through Antarctica and the South Atlantic islands to observe penguins, whales, and other wildlife.

"There is ice in the area. Obviously it's a hazard of the area. But it's highly unusual (that the ship would hit the ice). This has never happened to us."

An Argentine navy statement said Explorer was in waters about 475 nautical miles southeast of Ushuaia, the southernmost Argentine city and a jumping-off point for cruise ships and supply vessels for Antarctica.

In Oslo, Norway's Hurtigrute cofirmed passengers and most of the crew of the MS Explorer had safely been taken about its cruise ship MS Nordnorge.

The line's spokesman Stein Lillebo said about three ships had arrived in the area to assist in the rescue, but that Nordnorge was selected to take on the passengers because of its capacity.

"We have just taken on board all the passengers from the ship, and a large portion of the crew. The only ones not board are the one who drove the rubber boats that were used during the action," he said.

He added, "The reports I have are that the mood is very good, and that those who came on board are getting the help they need."

Monica Giraudo, at the Antarctica tourism office in Ushuaia, Argentina, told The Associated Press that the MS Explorer was one of 38 passenger ships heading to Antarctica during the summer tourist season that runs from October through April.