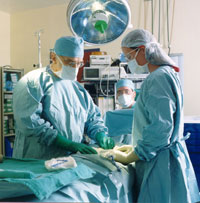 Under the Geneva Convention, medical personnel wearing the Red Cross are considered noncombatants, and may only carry light weapons, such as a pistol, to defend themselves or their patients.

However, the military confirmed that, until recently, doctors and nurses serving with Norwegian peacekeepers had sometimes been called upon to man heavy, vehicle-mounted machine guns while joining their units on patrol in northern Afghanistan.

Lt. Col. John Inge Oeglaend, a spokesman for the Norwegian Joint Headquarters, said procedures had been tightened and the practice was banned.

"No one who carries an offensive weapon may wear the Red Cross arm band," said Trygve Nordby, secretary general of the Norwegian Red Cross. "This is a very serious violation of the Geneva convention."

He said such a practice could endanger humanitarian aid workers everywhere working under the Red Cross because "the emblem gives medical personnel special protection in war and conflicts."

The Norwegian Internet news Nettavisen first exposed the practice, and reported that medical personnel routinely manned the machine guns to protect their units on patrol while wearing the Red Cross.

Henrik Glette, spokesman for the Norwegian branch of the Doctors Without Borders, said by telephone: "In recent years, we have seen a steadily more unclear line between humanitarian effort and military efforts. ... It makes our work more difficult."

Per-Ove Widht, a member of the Norwegian Parliament's defense committee, said he would demand an immediate explanation from Defense Minister Anne-Grete Stroem-Erichsen.