U.N. food agency apprehends that the spread of Rift Valley Fever in Sudan could escalate in coming weeks as during a Muslim holiday millions of animal are expected to be moved around. 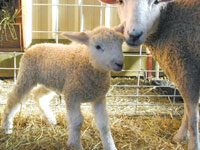 The Food and Agriculture Organization said the disease - which has so far killed 164 people, according to the World Health Organization - could spread further as farmers drive herds of sheep around the country.

Muslims all over the world usually sacrifice a sheep to celebrate the Eid al-Adha holiday. This year, the holiday is celebrated around Dec. 20.

FAO said it offered to send a team of animal health experts to Sudan to help veterinary authorities set up monitoring programs. The Rome-based agency said it had urged local authorities and religious leaders to launch an awareness campaign.

The agency also said that Egypt and Saudi Arabia have banned livestock imports from Sudan.

It is normally a mild disease with a fatality rate of around 1 percent. But in patients who develop the hemorrhagic fever form, the fatality rate is at around 50 percent, according to WHO.

There is no treatment for the disease, which is spread to humans mostly through contact with the blood and organs of infected animals or from bites of infected mosquitoes.