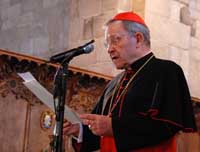 Roman Catholic Church must investigate why more and more Christians leave it and join Pentecostal and other evangelical groups, a senior Vatican cardinal told a gathering of the world's top prelates Friday.

Cardinal Walter Kasper, who heads the Vatican's office for relations with other Christians, told a meeting of more than 100 cardinals that the Church must undergo a "self-critical pastoral examination of conscience" to confront the rise of Protestant groups which the Vatican describes as "sects."

"We shouldn't begin by asking ourselves what is wrong with the Pentecostals, but what our pastoral shortcomings are," Kasper told the gathering, noting that such evangelical and charismatic groups count some 400 million faithful around the world.

The Vatican has been increasingly lamenting the rise of Protestant evangelical communities in Latin America, Africa and elsewhere and the resulting flight of Catholics. In Brazil alone, Roman Catholics used to account for about 90 percent of the population in the 1960s; in 2005 it was down to 67 percent.

With such statistics, some churchmen have questioned how much longer Latin America - home to half of the world's Roman Catholics - can continue calling itself a Catholic continent.

Friday's meeting came on the eve of a ceremony Saturday to elevate 23 new cardinals. As he did during his first consistory in 2006, Pope Benedict XVI asked the world's cardinals to come to Rome early for a meeting to discuss pressing church issues before the ceremony.

"Ecuminism is not an option but an obligation," Kasper said he told the cardinals, noting that Benedict made a similar statement in his introductory remarks to the meeting.