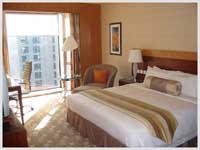 Beijing’s health bureau, frightened by a spike in new HIV infections in China's capital, ordered all hotels to to stock condoms in every room, Xinhua News Agency reported Friday.

Beijing registered 973 new cases of HIV/AIDS in the first 10 months of the year, a 54 percent rise against the same period last year, Xinhua reported.

That brought the city's total to 4,663 cases since 1985, Xinhua said. Among those cases, 171 were foreigners, 964 were Beijing permanent residents and 3,524 were from other parts of China.

In recent years, China has pushed for greater condom availability in public places like karaoke clubs and restaurants as part of a more candid approach to its AIDS problem.

China has scaled back its estimate of the number of people infected with HIV to 650,000 in 2005, the last year for which figures are available.