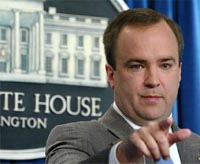 In the past, White house secretaries kept secrets while their bosses remained in office for that was an unwritten rule for them. But not now, when they are writing political tell-all books.

Scott McClellan, who served as White House press secretary for nearly three years of the Bush administration, surprised his former colleagues last week when his publisher released three teaser paragraphs from his upcoming book. The excerpt seemed to blame U.S. President George W. Bush for McClellan's false statements during the early days of a scandal regarding the leak of a CIA agents name.

"The old rules and old standards of what was considered proper and what was not are less and less abided by," said Jody Powell, who was President Jimmy Carter's press secretary. "That's true in all walks of life."

Plenty of press secretaries have written behind-the-scenes books. But such glimpses have traditionally been available only after the president has left office. George Christian, for instance, published "The President Steps Down," a year after Lyndon Johnson left the White House.

Once the president is out of office, the stories belong to history, said Marlin Fitzwater, who served as White House press secretary under Presidents Reagan and Bush and published his memoir in 1995 .

"In this day and age, there are so many books, the public hardly blinks an eye on the question of loyalty," Fitzwater said.

Veteran political consultant Tobe Berkovitz, the dean of Boston College's communication school, said loyalty has faded as the image of the White House press secretary has changed. Once merely a mouthpiece for the president, press secretaries have become political stars in their own right.

Fitzwater dates the trend to 1988, when his predecessor in the Reagan administration, Larry Speakes, published "Speaking Out." The memoir described the president as aloof, cast Vice President George H. W. Bush as a "yes man," and generally created ill will in Washington.

"I have no affection for these kiss-and-tell books," Reagan said at the time.

"You have a responsibility not to embarrass the president," said Stephanopoulos, who often conducted the daily press briefings and acted as an official spokesman.

Yet Stephanopoulos fetched a $2.7 million advance for his 1999 memoir "All Too Human." In it, Stephanopoulos said he "felt like a dupe" for defending Clinton's character and painted an often unflattering portrait of the president.

"I think he's probably more comfortable being part of the professional critics of the Washington establishment," Clinton later said of his former aide.

Whether McClellan's book, "What Happened," will follow his predecessor's lead or take a more incisive tone remains unclear. The book isn't even finished. The teaser quotes were released five months in advance.

After the excerpt caused buzz on Capitol Hill, McClellan's editor offered a clarification.

"He's not suggesting the president himself had lied," said PublicAffairs Books editor Peter Osnos, adding, "Scott's not a guy who's pursuing any sort of agenda or being vindictive."