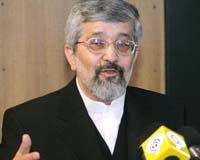 The U.S. is using unfounded scare tactics in insisting Tehran was trying to develop a nuclear weapon. A senior Iranian envoy said Friday, rejecting U.N. sanctions on his country as invalid.

The comments by Ali Asghar Soltanieh, the chief Iranian delegate to the International Atomic Energy Agency, were made available to The Associated Press before delivery at the closing session of the IAEA's 35-nation board as it focused on an agency investigation of the Islamic Republic's nuclear program and its defiance of a U.N. Security Council ban on uranium enrichment.

Soltanieh on Thursday called on the Security Council to close the file on his country's nuclear activities, saying Iran was close to dispelling fears about its intentions that have prompted sanctions.

In comments Friday, he said Security Council resolutions demanding a stop to the activity - a possible path to nuclear weapons - have "no legal basis." And he accused Washington of making "a political issue" of what he maintained was Tehran's peaceful nuclear program by falsely warning of the "threat of Iran's plutonium nuclear weapon."

"Allegations ... (of) Iran's clandestine and non-peaceful activities are now proved to be baseless," he said.

But the U.S. said Tehran only wanted to "distract the world" while moving closer to being able to make atomic bombs. Washington and its allies suggested further U.N. penalties might be in the offing unless Iran suspends uranium enrichment and complies with other Security Council demands.