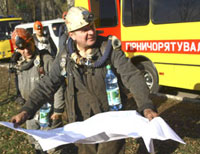 A methane blast ripped through tunnels hundreds of meters (thousands of feet) below ground Sunday, killing at least 90 people and rending hearts throughout the city at the center of Ukraine's vital but troubled coal industry.

"Of course, this is a mournful day for all of us we are digging graves for our dead comrades," mine electrician Stanislav Omelyanenko said at a cemetery just outside the grounds of the mine.

At that cemetery and others, 17 of the victims were buried Tuesday.

Zasyadko, one of Ukraine's biggest and best-known mines, has been the site of repeated accidents in the past decade. Ukraine's mines, regarded as among the world's most dangerous, are an important element of the country's economy.

The previous highest death toll in a Ukrainian mine was 81 killed in an explosion in the Luhansk region in 2000.

The bodies pulled from the area where the remaining miners were believed to have been trapped were burnt, indicating that others could not have survived, Mykhailo Volynets, the head of the Independent Trade Union of Miners, said Monday.

"Unfortunately, there is no hope," Volynets said.

Tuesday was declared a day of mourning across the nation of 47 million. President Viktor Yushchenko, who visited Donetsk on Monday, ordered a government commission to investigate the accident and called for an overhaul of the coal mining sector.

More than three-quarters of Ukraine's roughly 200 coal mines are classified as dangerous because of high levels of methane, the concentration of which increases with depth. Mines must be ventilated to prevent explosions, but some rely on outdated ventilation equipment.

"This is one of the most advanced mines, and it has the most modern methods of protection against methane," Klyuyev said. "Unfortunately, the deeper the mine, the more problems we encounter."

Safety violations and negligence add to the problem.

Volynets said that Ukrainian mines routinely neglect safety rules and workers are paid by the amount of coal they extract, not by the hour. He said miners routinely disable gas detectors that monitor the level of methane in order to continue work.

There is growing appetite for Ukraine's rich coal reserves, particularly with natural gas prices rising. The government has called for production to increase by one-third, to 80 million tons this year.

Zasyadko is one of the best-paying mines in the country, and miners say there is high competition to get hired. One mine official said a typical miner at Zasyadko can earn about four times the country's average monthly wage of US$258 (Ђ190); maintenance workers bring home about twice the monthly average wage.

Miners, however, still complain the pay is not proportional to the risk they take. The mine has seen several fatal accidents in recent years 13 people were killed last year in an explosion, 20 in 2002 and 54 in 2001.

Since the Soviet collapse, more than 4,700 miners have been killed in Ukraine.