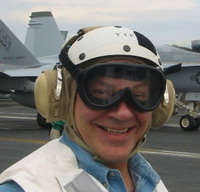 "If my advertisement is 'fear-mongering' then Mothers Against Drunk Drivers should apologize for suggesting that drunken driving kills innocent people. So do open borders," the Republican candidate and Colorado congressman said in a column published in Friday's Denver Post.

Tancredo, a long-shot candidate who has made immigration the centerpiece of his campaign, cited congressional testimony by FBI Director Robert Mueller in 2006 that there is evidence persons of Middle Eastern origin are learning Spanish and taking on Latin American identities. Tancredo also said there is evidence that Hezbollah, an Iranian-backed Lebanese group the U.S. has designated a terrorist organization, is organizing in Central and South America.

Tancredo was responding to an editorial earlier this week in the Post which described his ad as "over-the-top rhetoric and fear-mongering."

The ad, airing in the early-voting states of Iowa and New Hampshire, shows a man in a hooded sweat shirt with a backpack in a crowded mall. The screen goes dark at the sound of an explosion, and then the ad displays clips of the aftermath of terrorist acts in Europe, including a picture of a bloodied child.

"There are consequences to open borders beyond the 20 million aliens who have come to take our jobs," a narrator says. "Islamic terrorists now freely roam U.S. soil, jihadists who froth with hate, here to do as they have in London, Spain, Russia. The price we pay for spineless politicians who refuse to defend our borders against those who come to kill."

"I approve this message because someone needs to say it," Tancredo says at the beginning of the ad.

The Post said the ad is a sign of political desperation on the part of a candidate going nowhere in the presidential race.

"What do you do when your quixotic bid for the presidency is failing to catch fire with, well, anyone? Scare them into voting for you," the unsigned editorial said.

"Unfortunately, as is usually the case with Tancredo, he has pinpointed a real problem but the issue is lost in his over-the-top rhetoric and fear-mongering," the editorial said.

"Tancredo has languished near the bottom of the second tier of presidential candidates. His ad smacks of desperation."