The United States found fault with Russian restrictions on election observers after an international security organization said it had abandoned plans to monitor next month's parliamentary vote. 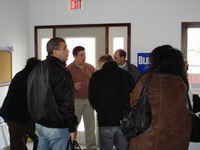 State Department Spokesman Sean McCormack said that Russia had deliberately hindered the ability of the Organization for Security and Cooperation in Europe to send observers for the elections.

"It is extremely unfortunate that the Russian government put up all these obstacles to the OSCE sending a monitoring mission to Russia," he said. "I am not sure that you can find a case in the past where a member country had put up such obstacles."

The OSCE said Friday it had abandoned plans because Moscow refused to issue visas to its observers on time.

Russia has already come under criticism because it had said it would allow the Organization for Security and Cooperation in Europe to send only 70 observers - far fewer than in previous Russian elections - for the vote.

The White House on Friday called on Russia to lift the restrictions in time for the elections.

"The Russian government should honor its commitments as an OSCE member, lift any constraints on ODIHR and permit them to observe the 2008 voting in a manner consistent with free and fair elections," said Gordon Johndroe, a spokesman for the National Security Council. Johndroe was referring to OSCE's office for Democratic Institutions and Human Rights.

A spokesman for Russian President Vladimir Putin insisted that Moscow was complying with its obligations to the OSCE.

All 56 OSCE member countries - including Russia - agreed in 1990 to invite international observers to monitor their elections. The organization then decides whether to send observers based on scheduling and need.

In another sign of Russia's defiance of the West, its upper house of parliament voted Friday to suspend participation in a key European arms control treaty.

The Federation Council voted unanimously for a law suspending Russia's obligations under the Conventional Forces in Europe treaty that limits the deployment of tanks, aircraft and other heavy weapons across the continent.

McCormack said that decision was also disappointing, but added that the United States was still working to solve the impasse over the treaty.

Putin has called for Russia's temporary withdrawal from the treaty amid mounting anger in the Kremlin over U.S. plans to build a missile defense system in eastern Europe.