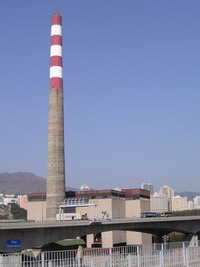 But China Light and Power, the company that operates the plant, said the data was wrong, citing its own independently audited reports that put carbon dioxide emissions at 13.3 million metric tons (14.7 million U.S. tons) for 2006, well under half the amount cited in the database.

Researchers at the Washington-based Center for Global Development, which directed the global database of carbon emissions, had agreed to amend the data, CLP spokesman Carl Kitchen said.

Researcher Kevin Ummel confirmed CLP had been in touch soon after the database went live on Wednesday and that as a result of their dialogue they would change the earlier carbon dioxide estimates for all of CLP's plants to reflect the figures in their emissions reports.

"Judging from the information we received from CLP, it appears the company has been operating the Castle Peak plant at about half the capacity we would normally expect ... that fact would explain much of the CO2 discrepancy," Ummel told the AP late Friday.

"This is exactly what we want to see happen with CARMA. CLP has met the high standards that we put forth for correcting our estimates and we thank them for bringing it to our attention," he said.

Ummel said CARMA was also in the process of deleting reference to the Hok Un plant in CLP's portfolio, after the energy company pointed out it was decommissioned in the early 1990s.

The Carbon Monitoring for Action database was launched Wednesday and proclaims itself as "the world's best place for power-plant voyeurism."

Using an array of information filters, a user can find out how much CO2 comes from electricity plants in a particular city, country or continent, or from a specific company or an individual plant.

Lead researcher David Wheeler said that in the hours since the site had gone live, CLP was the only company to come forward with an objection about the data.

"We're committed to providing the best possible information about the power sector, and we have a standing offer to revise our numbers for any plant if we have credible independent evidence," Wheeler told the AP in an e-mail.

Pollution is a hot-button issue in Hong Kong, where the glittering skyline is often hidden from view by a blanket of smoggy haze.