Officials and residents tried to save a whale that ran aground. It was found on an Amazon jungle sand 1,000 miles (1,600 kilometers) from the ocean. 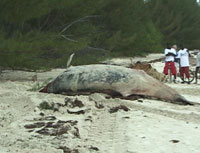 Dozens of people gathered along the Tapajos River to try to save the whale, which was suffering in the Amazon heat, the Globo newspaper said on its Web site.

The government Environmental Protection Agency reportedly sent biologists and veterinarians to the remote rain forest site to try to dislodge the mammal from the sand bank and return it to the ocean.

The agency said the whale apparently entered the Amazon River at its mouth in Belem and kept swimming until it ran aground Wednesday near Santarem in Para state. Sea creatures rarely venture so far into fresh water.

Phone calls to the agency went unanswered Friday, when many government offices were closed for a long holiday weekend.

The creature reportedly is a minke whale, the second smallest of the baleen whales after the pygmy right whale, with an average length of about 23 feet (7 meters).

The International Whaling Commission Scientific Committee estimates there are about 184,000 minke whales in the central and northeast Atlantic Ocean.