2,000 employees at the state alcohol monopoly went on strike. That made Finns wait in long lines at the 42 liquor stores that remained open nationwide. 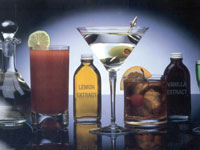 Almost 300 stores across the Nordic country were shut down because of the three-day strike, which started Thursday after labor talks between the alcohol sales company Alko Inc. and union officials broke down.

Company managers were brought in to keep 42 outlets open, including one in the capital, Helsinki. On Friday afternoon, the queue outside the store stretched about 30 meters (100 feet) as Finns rushed to stock up on alcohol for the weekend.

Alko issued a statement saying that sales had proceeded smoothly despite the strike, but acknowledged that there were "some queues," or lines, outside the stores. It also said its Web site was jammed because of the high number of visitors checking which stores remained open.

The union is demanding better working conditions for sales staff at Alko stores. It also warned of a new strike at the outlets starting Dec. 1 of no agreement is reached.