About 1,000 passengers were grounded at Canada's largest airport becuase of an error in a major airline's computer reservation system that entailed flight delays. 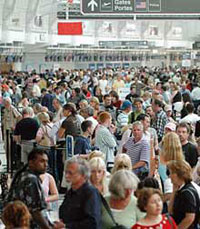 The problem occurred at around 4 a.m. at Toronto Pearson International Airport when Air Canada's booking system experienced a communications error between the airline's central reservation system and computer systems at airports across Canada, said John Segaert, Air Canada's general manager in Toronto. The airline was unable to print boarding passes.

The problem, which has been fixed, caused flight delays of between 30 and 60 minutes, Segaert added. The airline predicted operations would be back to normal by Friday afternoon.

The massive lineup of backlog passengers snaked through the cavernous Terminal One at Pearson, where travelers heard a recorded message over the terminal's public address system pleading with passengers to be patient.

Angela Mah, a spokeswoman with the Air Canada based in Vancouver, could not detail the extent of the problem nationwide, but said the biggest problems were at the airline's Toronto operations.

"Of course because Pearson is our hub and has the greatest volume of our flights that is where our impact was felt the most," she said. "Flights are departing across our network, albeit there are some delays."

Despite the massive backlog of passengers at Pearson, Mah expressed confidence that Air Canada operations would be back to normal by Friday afternoon.