Estranged pastor's wife demands church as asset in their divorce

Pastor blended his professional and personal finances so thoroughly that his estranged wife belives church should be counted as an asset in their divorce. 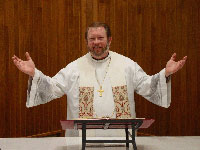 Estranged pastor's wife demands church as asset in their divorce

A judge agreed in a decision published this week to hear arguments on the claim, and he ordered a financial appraisal of the church. Lawyers said it could represent the first time anyone in New York state has tried to treat a religious institution as a marital asset.

The wife argues that her husband of 31 years used his Brooklyn church as a "personal piggy bank," setting his own income, spending the congregation's tithes as he pleased and running a catering business from the building, according to the decision by state Supreme Court Judge Arthur M. Diamond. The couple's names were redacted from the decision.

The wife said $50,000 of the couple's money went into starting the church, and that the church property is partly hers.

"That church is no different than any other business he might have opened," said the wife's lawyer, Robert Pollack.

The pastor maintains he is simply a church employee, and the institution's funds should not be considered his, according to Diamond's decision.

"My client can't own the church," said the minister's lawyer, Eleanor Gery.

A message left at the church was not immediately returned early Friday.