A woman was convicted of leaving a red lipstick mark on a painting by Cy Twombly, an American artist. She was ordered to do 100 hours of community work. 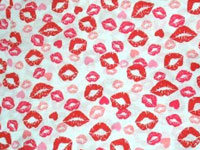 The painting is owned by collector Yvon Lambert. He had asked for more than Ђ2 million (US$2.9 million) in damages, which included the value of the painting and the Ђ33,400 (US$47,000) restoration cost.

During the trial, Sam argued that she had committed an "act of love" not vandalism. "I didn't think," she said last month. "When I kissed it, I thought the artist would have understood."

Sam was taken into custody after she kissed the painting at an exhibit in Avignon on July 19.

Twombly is known for abstract paintings, some of which use repetitive lines, graffiti, letters and words. Born in Lexington, Virginia, in 1928, Twombly has lived in Italy for nearly a half-century. He won the prestigious Golden Lion award at the Venice Biennale in 2001.