Hamas warns of violence if Palestine makes concessions to Israel in U.S.-meet

Hamas loyalists demonstrated in a Gaza City on Friday and warned Palestinian President Mahmoud Abbas that violence would erupt if he makes concessions to Israel in an upcoming U.S.-sponsored peace conference. 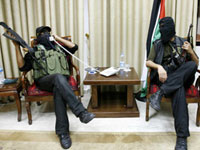 Hamas warns of violence if Palestine makes concessions to Israel in U.S.-meet

The protest of about 10,000 Hamas loyalists highlighted tensions between Hamas and Abbas' Fatah Party. The gathering came just days after Hamas security shot and killed eight civilians at a large Fatah rally that was the Western-backed movement's greatest showing of force since Hamas wrested control of the Gaza Strip in June.

Abbas called on Thursday for action against the Hamas rulers of Gaza, saying "We have to bring down this bunch ... (that) is abusing the sufferings and pains of our people." As the leader of the West Bank after he kicked Hamas out of the government and installed his own, Abbas will attend the meeting with Israel in Annapolis, Maryland later this month. Hamas is not invited.

In Friday's demonstration, the Hamas backers chanted slogans demanding Abbas not give in on the major issues in the conflict. They protested outside Abbas' Gaza home, which has been deserted since the Hamas takeover.

Khalil al-Haya, a Hamas leader, warned of violence if Palestinian rights over the Al Aqsa mosque in east Jerusalem are denied. Bloodshed will also result if Israel does not open Gaza's crossings with the outside world, he said. Israel closed the passages after Hamas' takeover of Gaza.

"We warn the whole region ... against harming Al Aqsa, meddling with our basic rights, or tightening the siege" on Gaza, al-Haya told the crowd. "We warn of a huge explosion, in which Palestinians will blow up in all places ... No seas or barbed wire will prevent that."

Al-Haya did not specifically say Hamas would carry out suicide bombings. The remarks appeared to be a veiled threat of a return to attacks. Hamas has carried out dozens of suicide bombings in Israel in which hundreds have been killed. The group has not been involved in suicide bombings since 2004.

Israeli security has predicted that Hamas could try to violently derail the peace conference if it appears progress is being made toward resolving the Israeli-Palestinian conflict.

The Hamas demonstrators called on Abbas not to make concessions on Palestinian demands regarding Jerusalem, the borders of a Palestinian state and the return of Palestinian refugees to homes they fled when Israel was established in 1948.

"We are coming to you Al Aqsa," the crowd chanted. Through a loudspeaker a man shouted "Let the land burn under the feet of those who give up the land, the right of return, and Jerusalem."

Fawzi Barhoum, a Hamas spokesman, said the rally was a message to the Annapolis conference.

Hamas' rivalry with Abbas' Fatah movement and control of the Gaza Strip undermine Abbas' ability to negotiate a peace deal on behalf of all Palestinians, and preside over a future state.

Abbas' comments Thursday were his first clear demand that Hamas be ousted since the militant group seized power in Gaza. He did not urge an uprising against Hamas, but apparently wanted to capitalize on growing discontent with Hamas among the 1.5 million residents in the impoverished territory.

Despite Abbas' tough words, he has little influence in Gaza. Hamas has tried to cement its grip on the territory since the rally, rounding up more than 400 Fatah activists and announcing media restrictions and plans to limit public gatherings.

On Friday, Hamas said it had released dozens of the Fatah detainees but was continuing to hold and interrogate an unspecified number who were "directly involved" in the disturbances. Fatah says 450 people were arrested in all.