An allegedly illegal immigrant was shot dead in a scuffle with a police officer during an operation to crack a people-trafficking ring near the village of Pyla. 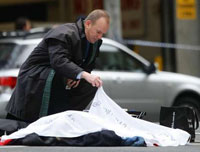 The man, whose identity was not released, suffered a gunshot wound to his stomach and was pronounced dead at a hospital shortly afterward, police said.

He had been among four suspected illegal immigrants who fought with the policeman after being pulled over as they drove along a coast road outside Pyla, on the island's southern coastline, said Police Chief Iakovos Papakostas.

He said police had mounted the operation after receiving a tip that a trafficking ring would attempt to smuggle a "large number" of people through Pyla into southern Cyprus from the Turkish-held north of the war-divided island.

Another 11 suspected illegal immigrants were arrested in the area, Papakostas said.

Pyla is a mixed Greek Cypriot and Turkish Cypriot village that straddles the buffer zone separating the north from the Greek Cypriot-run south.

It is the only village on the island where the United Nations peacekeepers are responsible for "maintaining law and order in cooperation with authorities" on either side of the divide, U.N. spokesman Brian Kelly said.

Papakostas said Pyla is a "sensitive area," one of many where crossings of illegal immigrants occur.

Cyprus was divided in 1974 when Turkey invaded and occupied its northern third in response to a coup aiming to unite the island with Greece.