Norway's Lutheran church bans allowing those living in homosexual partnerships to serve in the clergy. But each bishop will be able to make individual decisions on whether to employ them. 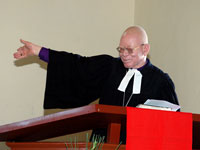 The compromise decision reflected the realization that the church may have to live with a deep split over the issue.

After an anguished week of debate at its annual meeting, the church's 86-member governing synod voted 50-34 to make the change. Two members abstained. The meeting, which ended Friday, was held in the town of Lillehammer.

The decision means that six of Norway's 11 bishops are likely to open the pulpit to gay clergy in partnerships. In a vote earlier in the year, those six bishops voted in favor of easing the ban.

The church already allows gays to serve in the clergy as long as they are not living in a homosexual partnership.

Friday's vote prompted mixed reaction on whether it would settle the emotional debate.

"This will create peace in the church, and security for homosexual clergy," Marit Tingelstad, head of the Bishop's Council for southeastern Norway's Hamar district, said on the state radio network NRK.

Bishop Ole D. Hagesaeter, of the Bjoergvin district, said, "This is a sad day for the church. It will be a splitting factor and lead to many feeling homeless in the church."

The synod's vote was a compromise revision of a 1997 resolution by the highest body in Norway's state Protestant church that barred all clergy who enter homosexual partnerships from holding consecrated jobs.

Under Norwegian law, people in gay partnerships have the same rights as those in heterosexual marriages, apart from church weddings and adoption.

The church, with nearly 85 percent of Norway's 4.7 million people as members, has remained locked in a heated debate on the topic.

Opponents of gay clergy believe homosexuality is contrary to Biblical teachings, while proponents say a modern church should be open to all faithful, regardless of sexual orientation.

"Finally, I can get rid of the feeling of having a B-team membership in the church," gay church member Arne Groenningsaeter was quoted as telling the Norwegian news agency NTB.

Some gay clergy already serve in parochial posts. In 1999, Norway's first female bishop, Rosamarie Kohn, now retired, faced an uprising by some of her own clergy by allowing lesbian clergywoman Siri Sunde to return to the pulpit even though she married a woman.

In 2000, the Norwegian government, which formally employs all state church staff, upheld the appointment of Jens Torstein Olsen as a clergyman in Oslo, even though he lived with a gay partner in violation of the 1997 church decision.

Varying practices in 11 bishops' districts could trigger lawsuits on whether different employment practices in the same organization violate anti-discrimination and labor laws.

"This is food for the Supreme Count," said synod delegate Hans Petter Jahre, a special legal adviser to the national prosecutor.