Senior US envoy flies to Pakistan to discuss political crisis

U.S. envoy arrived in Pakistan to impel President Gen. Pervez Musharraf to lift the state of emergency and put an end to repression that has caused political crisis in his country. 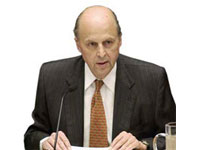 Senior US envoy flies to Pakistan to discuss political crisis

In an apparent move to blunt criticism from Musharraf's key foreign backer, authorities released opposition leaders including Benazir Bhutto as well as a U.N. human rights expert from detention and let two independent news channels back on air.

But the general also pressed on with disputed plans for January elections, swearing in a caretaker government charged with preparing Pakistan for the vote and defending his record during the eight years since he seized power in a coup.

"I take pride in the fact that, being a man in uniform, I have actually introduced the essence of democracy in Pakistan, whether anyone believes it or not," a solemn-looking Musharraf said after the low-key ceremony at the presidential palace.

Negroponte was expected to meet Musharraf, long a key U.S. ally, and leaders of Pakistan's opposition but details of his schedule were not disclosed. It was unclear if he would meet with Bhutto.

Negroponte arrived from a stop in Africa, where he said that the democratic process in Pakistan had been "derailed."

"Our message is that we want to work with the government and people of Pakistan and the political actors in Pakistan to put the political process back on track as soon as possible," Negroponte said.

Under domestic pressure for relying too heavily on Musharraf, Washington appears increasingly exasperated with a man that U.S. President George W. Bush has long defended as a stalwart ally against international terrorism.

The White House has called for him to lift the emergency immediately or destroy the credibility of parliamentary elections supposed to make the general look more democratic. But Musharraf has suggested that the constitution could remain suspended during the campaign and the voting.

The crisis has estranged Musharraf from Bhutto, a secular, pro-Western leader who had been widely expected to join forces with Musharraf if she fared well in the election.

Bhutto was one of thousands of opposition activists detained since Musharraf declared the emergency on Nov. 3. She was freed on Friday morning from house arrest imposed three days earlier to stop her from leading anti-Musharraf protests.

Bhutto, who leads Pakistan's largest opposition party, immediately reiterated her call for Musharraf to quit power, and said his sidelining of moderate opponents had allowed the rise of Islamic extremism.

She is calling for opposition parties to unite and maybe boycott the elections.

"Do we want to deny this nation its true legitimate leadership and make way ... for extremist forces?" she asked reporters at the house in the eastern city of Lahore where she had been confined. "The West's interests lie in a democratic Pakistan."

In Washington on Thursday, U.S. Defense Secretary Robert Gates declined to say whether he thought Bhutto would be more effective than Musharraf against international terrorism.

"I would say, though, that his ability to lead, to continue to be a partner in the war on terror very much depends on how developments unfold over the next few weeks in Pakistan," Gates said. "He needs to move beyond the emergency measures as quickly as possible. I think our view is he needs to step out of army chief of staff role and become a civilian."

Musharraf, who seized power in a 1999 coup, insists he is still moving toward a restoration of democracy and civilian rule that Western governments believe could help stabilize the nuclear-armed country.

On Friday, he swore in an interim government headed by loyalist former Senate chairman Mohammedmian Soomro. Parliament was dissolved Thursday after completing its five-year term. The caretakers will manage the country until elections due by Jan. 9.

"I hope and pray that the new Cabinet and new prime minister, in these difficult times, functions with only one thing in mind: Pakistan comes first," Musharraf said.

Opposition parties dismiss the interim administration as irrelevant because of Musharraf's seizure of extraordinary powers.

The general insists he declared the emergency to prevent judicial interference and the rising threat from militants linked to the Taliban and al-Qaida from derailing the vote.

On Friday, the army said it used helicopters to pound militant positions in Swat, a mountain valley in the north seized by followers of a pro-Taliban cleric in the summer. The army says scores of militants have been killed there this week.

But opposition parties as well as the U.S. and Britain say the ballotcannot be fair unless the restrictions are ended. Demonstrations continued Friday in defiance of a ban on political gatherings.

In the northwestern city of Peshawar, police used tear gas and batons to break up a rally by 500 supporters of a coalition of religious parties and detained more of their leaders.

The same groups staged smaller rallies in Islamabad and the southern city of Karachi.

About 3,000 students rallied at a university campus in Lahore, chanting slogans against Musharraf and in favor of Imran Khan, the cricketer-turned-politician detained Tuesday.

Analysts say Musharraf's ability to ride out the crisis depends on whether he can keep the powerful army and the United States on his side. He also needs to keep Pakistan's feuding opposition parties divided.

Exiled former leader Nawaz Sharif has welcomed Bhutto's calls for an opposition alliance to restore democracy and said he is willing to put their intense rivalry behind him.

However, he said Thursday the priority was to reinstate the Supreme Court judges ousted by Musharraf. The court had called for Sharif to be allowed to return.

Islamist parties opposed to Pakistan's pro-U.S. course are likely to resist Bhutto's attempt to put herself at the lead of any joint campaign and have been noncommittal on the idea of boycotting the polls.

Musharraf told the AP on Wednesday that he expects to relinquish his role as army chief by the end of November but stay on as a civilian president.