From a retailer's perspective New York's famous Fifth Avenue is the world's most expensive shopping strip. 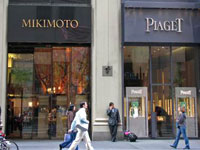 At an average of $1,500 (€1,025) per square foot (0.09 square meters) per year, rents in a prime stretch between 49th and 59th streets are higher than in any of 231 other top shopping districts, the international real estate firm Cushman & Wakefield found. Its "Main Streets Around the World 2007" report was released this month.

Hong Kong's Causeway Bay held its position as the second most expensive street for the second straight year with average rental rates of $1,213 (€828) per square foot, while Paris' Avenue des Champs-Elysees held third place at $922 (€629.3) per square foot.

Many of retailing's global glitterati have a presence on Fifth Avenue, including Cartier, Gucci and Versace. Tiffany & Co.'s flagship Fifth Avenue store is enshrined as a symbol of luxury in the memories of countless viewers and readers of "Breakfast at Tiffany's," the 1958 Truman Capote novella made into a 1961 movie starring Audrey Hepburn.

"For many of these stores, Fifth Avenue itself is a statement for branding purposes," said Eugene Spiegelman, Cushman & Wakefield's director of retail brokerage.

"If you are coming from the U.K. everything is a half-price sale, Spielgelman said. "It's a very compelling reason for shoppers to come in and spend money."

The survey found that the biggest rise in rank from the past year was the Khan Market in New Delhi, India, which jumped to the 16th most expensive retail area in 2007 with an average rent of $280 (€191) per square foot, from 24th in 2006.