About 6,000 train drivers' strike moved into the third day demanding from Deutsche Bahn to raise wages. 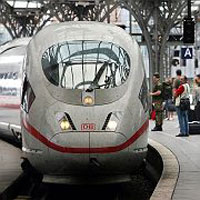 The short-term strike due to end at 2 a.m. (0100GMT) Saturday hit commuters and industry alike.

Volkswagen reported that some 10,000 new cars were stuck at its Wolfsburg plant awaiting trains to deliver them, while shifts at an Audi plant in Brussels were canceled because trains delivering parts from Bratislava were stuck in Germany.

The strike marks an escalation by the GDL union after it staged a 42-hour walkout against freight services last week but left passenger trains running. Previously, it had staged several strikes against commuter trains.

The action by GDL has affected millions of commuters, with only a third of regularly scheduled trains running in greater Berlin, Frankfurt and Stuttgart, Deutsche Bahn said. Roughly 20 percent of all commuter trains in the former East Germany were running, while half of trains in the former West were circulating as normal, according to the train operator.

In a dispute that has simmered for months, GDL wants a hefty pay increase for train drivers and is insisting that they be given a pay deal separate from that given to other railway employees a demand that Deutsche Bahn firmly rejects.

GDL has rejected a 4.5-percent raise that Deutsche Bahn agreed with two rival unions that represent a broader range of railway workers.

Deutsche Bahn has said its existing offer amounts to a raise of up to 10 percent for train drivers, along with better working conditions.

The German government and industry groups both have urged the two sides to return to negotiations, expressing concern about the possible economic fallout.