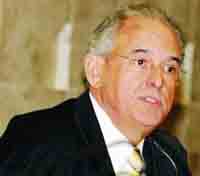 Brazil plans to build a nuclear submarine, which would protect a monster offshore oil reserve, discovered this month, the defense minister said.

"When you have a large natural source of wealth discovered in the Atlantic, it's obvious you need the means to protect it," Nelson Jobim said Thursday at a defense conference in Rio de Janeiro.

Jobim said Brazil must take steps to guard the Tupi field and its 5 billion to 8 billion barrels of oil reserves from other nations and from "actions that could come from the area of terror," the government's Agencia Brasil news service reported.

Brazil has been talking about building a nuclear submarine for decades, but the project got a boost in July when President Luiz Inacio Lula da Silva announced US$540 million (EUR370 million) in funding for uranium enrichment and the sub program.

Jobim said earlier this month that he wants to come up with an outline within three months for building a nuclear submarine at a cost of about US$1.2 billion (EUR820 million), the Agencia Estado news service reported.

Brazil has no South American enemies and has not experienced terrorist attacks, although U.S. government reports have sporadically raised suspicions that the nation's Triple Border region near Argentina and Paraguay is a fundraising source for radical Islamic groups such as Hezbollah and Hamas.

The Tupi discovery and other promising fields off the coast from Rio de Janeiro have prompted Brazilian officials to predict that the nation could become a major oil exporting nation and join the Organization of Petroleum Exporting Countries.

Brazil's ambassador to Saudi Arabia told Dow Jones Newswires on the sidelines of an OPEC meeting Friday that he was talking with group officials, and a decision would come after more is known about Brazil's export capacity.

The Brazilian navy's nuclear program, begun in 1979, has already mastered part of the uranium enrichment process. But it lags in developing and constructing a submarine reactor entirely from Brazilian technology.

His government moved in June to restart work on a long-planned third nuclear power plant that has been stalled since the 1980s by lack of funds.

Jobim on Thursday ridiculed the idea that Brazil's uranium enrichment program would ever be used to make a nuclear bomb.