Mugabe, top politicians pay to false witch and arrest her 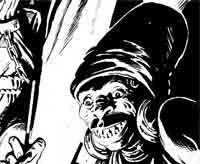 Mugabe, top politicians pay to false witch and arrest her

A woman got two head of cattle and three buffaloes from top ministers and president Robert Mugabe after claims she could produce gasoline out of rocks. Now the “witch” is arrested on fraud charges.

The Herald newspaper, a government mouthpiece, reported the woman claiming to be a tribal healer, known in the West as a witch doctor, also took large sums of money, a car and a piece of land from the nation's highest ranking politicians, promising in return to use spells to produce diesel fuel from rocks in the bush outside the provincial town of Chinhoyi, 115 kilometers (70 miles) northwest of Harare.

Instead of invoking spirits, the woman bought refined diesel from truckers plying the route from neighboring Zambia and piped it into the rocks, the newspaper reported.

It said Mugabe himself ordered Rotina Mavunga's arrest. She was charged with fraud last month - more than a year after the gas from rocks saga began.

"We are not going to be too hard on her. We just want the truth and to know who put her up to such things," the state media quoted Mugabe as telling guests at the commissioning of a biofuel plant Thursday in the nation stricken by the world's highest official inflation and chronic gasoline shortages.

Mugabe said police were afraid to pursue Mavunga. While most Zimbabweans are Christian, many also hold ancient beliefs in the powers of tribal ancestors.

Mugabe said he at one point sent a delegation of his most senior colleagues, including State Security Minister Didymus Mutasa, Defense Minister Sydney Sekeramayi and police minister Kembo Mohadi to investigate the claims, and when they returned without a clear answer he dispatched the ministers of energy, mines and science and technology and a third delegation of top military and police officers, the Herald reported.

Mugabe, 83, the nation's only ruler since independence from Britain in 1980, launched the first processing plant near Harare Thursday for jatropha, a plant used to make biodiesel fuel.

State radio said Friday the factory was a joint venture of the central bank and South Korean investors to process jatropha, cotton, sunflower and soya seed.