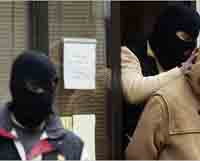 Alleged Muslim militants who took part in weapon trainings and had planned to travel to Iraq were detained by French authorities, police officials said Friday.

The seven men, all French citizens born between 1963 and 1985, were detained Tuesday in the eastern city of Besancon and the nearby town of Pontarlier, the officials said.

Police raids of the suspects' homes turned up munitions, handguns and pump and automatic rifles, officials said on condition of anonymity because the investigation was ongoing.

The case was expected to transferred to Paris anti-terrorism judges on Friday, the officials said.

Prosecutors were expected to file preliminary charges for criminal association with a terror group, which carries a possible penalty of up to 10 years in prison.

After the Iraq war erupted in 2003, France has sporadically detained suspects who sought to fight in the insurgency against the U.S.-backed government there.

The last such case was last month, when French authorities arrested seven suspects mostly near the southern city of Toulouse as part of a probe of an alleged al-Qaida-linked recruiting network.

French anti-terrorism authorities have expressed concern that such militants could return home with skill in combat and a desire to cause violence in France.