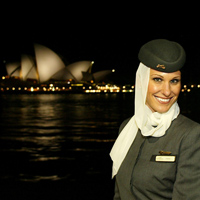 No Emirates’ national carrier’s employees were injured when an Airbus jet slammed into a wall during ground tests a day earlier, the company said.

An Airbus spokesman also corrected the company's statement late Thursday that seven employees of Etihad Airways were injured, saying they in fact worked for a firm contracted to test the plane.

Ten people were injured Thursday during engine tests of an Airbus 340-600 near the southwestern French city of Toulouse shortly before the jet was scheduled to be delivered to Abu Dhabi-based Etihad.

Airbus said nine people on board were injured in the accident, along with one person on the ground.

Airbus Chief Operating Officer Fabrice Bregier said late Thursday that seven Etihad employees were among the wounded. "It was normal for the client to be present on board the plane," Bregier said.

However, Etihad denied on Friday that any of its employees were injured. "At the time of the incident, there were no members of Etihad staff on board of the Airbus plane, which was expected to be delivered to us next week," said Greg Moore, a spokesman for the Dubai-based public relations firm Four Communications, which represents Etihad.

Jacques Rocca, an Airbus spokesman, said Friday that the seven non-Airbus staff on board the plane during the accident were employees of Abu Dhabi Aircraft Technology, a contractor working for Etihad. The company was not immediately available for comment Friday, the weekend in the Gulf.

The incident took place during a final round of tests before anticipated delivery, in which the plane's engines are powered up full-throttle as the brakes are applied.

French authorities ordered a technical investigation into the causes of the accident.