A policeman was shocked when he found a 13-year-old boy hiding behind the wheel of a truck that got stuck in the mud. 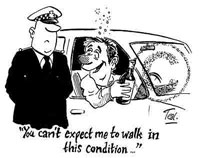 The boy's father, who was sitting in the passenger seat, told police he had had too much to drink and let his son drive. The boy had been drinking, too, police said.

"(The boy) even said he didn't want to drive because he was too drunk," McLellan told The Flint Journal for a story published Thursday.

The father, a 41-year-old Flint-area man, is facing several misdemeanor counts, including child endangerment, allowing an intoxicated person to drive his vehicle and allowing an unlicensed minor to drive, police said.

The boy has been petitioned into juvenile court on charges that include driving while intoxicated, police said.

The two were arrested Nov. 8. They apparently were trying to get home when they turned into the park to turn around. The truck rolled off the pavement and became stuck in the muddy soil.