The police officer who shot dead a Lazio fan is under investigation for premeditated murder rather than involuntary manslaughter. 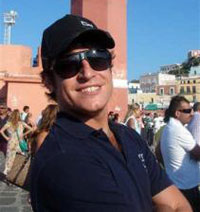 "The magistrate has changed the accusation," stiffening an initial probe for manslaughter to one for suspected murder, lawyer Francesco Molino said.

Gabriele Sandri was shot in the neck Sunday while he was sitting in a car that had stopped at a highway rest area near Arezzo in Tuscany.

Interior Minister Giuliano Amato said earlier this week that the officer had fired the fatal bullet with his arms outstretched from across the highway. Arezzo police had first said that the officer had fired the shot in the air in warning to stop a fight, possibly among rival fans, but later changed that version, saying the gun was fired horizontally.

Reports said police had intervened to stop a scuffle between Sandri's group of Lazio fans headed to see their club play at Inter Milan and a group of Juventus fans, also traveling north to see their team play.

Arezzo prosecutor Ennio Di Cicco said Thursday that knives and umbrellas, including a broken one, were found in the rest stop area, and that four occupants in the car Sandri was traveling in were being probed for carrying those objects, which could potentially be used as weapons.

At a meeting of soccer authorities on Thursday, league and federation officials ratified a decision to cancel all domestic play in Italy's second and third divisions this weekend the first division is on break until Nov. 24 for international play and to ban ctain fans from traveling when Series A, B and C resume the weekend of Nov. 24-25.

Teams which will play without their fans at their next away games include Atalanta, Catania, AC Milan, AS Roma, Sampdoria and Torino in the Serie A.