Serbia to investigate allegations of abuse at psychiatric hospitals 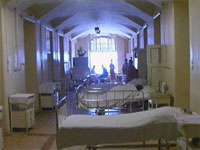 Serbia to investigate allegations of abuse at psychiatric hospitals

Serbia will swiftly probe accusations of systematic abuses of children and other patients at psychiatric hospitals and social care institutions, a senior governmental officilas promised Thursday.

A report released Wednesday by a U.S.-based human rights group called Mental Disability Rights International alleged that Serbia has neglected and mistreated its mentally disabled, keeping some of them tied to beds for years in institutions without proper care.

"This issue must be resolved," Justice Minister Dusan Petrovic said on Thursday. "The government will deal with it as soon as possible."

He said anyone found to have abused patients would be punished, but did not say what other action the government might take or if an investigation would be conducted.

Other officials have reacted defensively to the report, saying its findings were exaggerated or unfairly suggested that patients were intentionally mistreated.

The country's health minister, Tomica Milosavljevic, acknowledged psychiatric facilities had continued to suffer as the nation struggled to recover from the civil wars of the 1990s. But he said he did not think the report accurately described the situation.

On Thursday, he suggested there was an intention to "politically misuse" the report, noting that the group made no contact with the Serbian government and released the report first to the media.

The rights group acknowledged that some improvements have been made with help from foreign donors, but more needed to be done.

The group said some children and adults with disabilities never leave their beds or cribs and some are tied down for "a lifetime" to keep them from harming themselves. The group showed reporters a graphic video of patients and poor conditions at facilities in Serbia.

Social Affairs Minister Rasim Ljajic on Wednesday ordered one of the institutions cited in the report to stop admitting children.

Independent B92 radio on Thursday quoted a pediatrician at the Kulina center for the disabled as admitting they do restrain children occasionally for 15-20 minute periods and when they are in a position to hurt themselves.