A house fire killed a family of seven, including five children aged 10 months to 13 years, in Northern Ireland. Police started a murder investigation. 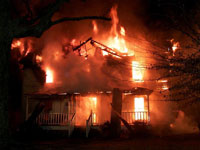 The blaze early Tuesday quickly destroyed the Omagh home of Arthur McElhill and Lorraine McGovern. The couple and all five of their children failed to escape. Neighbors described hearing screams and cries for help from the trapped family, but said they could not get into the two-story house using ladders because the fire was too intense.

Firefighters and police have called it the deadliest house fire in Northern Ireland history.

On Wednesday, Detective Chief Superintendent Norman Baxter announced that investigators had discovered that "a significant quantity" of fuel had been poured inside the home before the fire.

Baxter, the senior police officer in Omagh, declined to speculate on who might have been responsible or any possible motive. He said a 30-member forensic team needed to analyze evidence in greater detail.

"We have now moved to the position where we are saying this is a crime scene and we have commenced a murder investigation," Baxter told an Omagh press conference.

Omagh, a religiously mixed and largely middle-class town of 20,000, has yet to recover from Northern Ireland's deadliest terror strike: a car bomb planted in the center of Omagh by Irish Republican Army dissidents in 1998. The blast killed 29 people - mostly women and children - and wounded more than 200.

Baxter led the detectives' hunt for the bombers, but nobody has been convicted.