The long-standing rule that bars HIV-positive people from entering China will be mitigated. 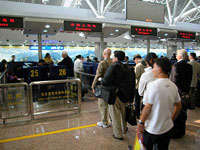 The law will be revised but a date has not yet been said, Ma said according to a transcript of a news conference posted on the ministry's Web site late Monday.

"At present, we are considering, and we are changing the present regulation that stops foreigners with HIV and AIDS from entering the country, and this job is underway," Mao said. He did not give further details.

The law dates from when China viewed HIV/AIDS as a Western problem. The country has made more open efforts to tackle the disease in recent years, but still clamps down on some AIDS-awareness activists who are critical of the government's policies on the spread of the virus.

The law has also stopped those with HIV or AIDS from attending conferences on the disease in China .

"The change is correct and significant. It will benefit international cooperation on HIV/AIDS and will eliminate most Chinese people's concept that AIDS comes from foreigners," said Wan Yanhai, a Chinese activist for AIDS awareness and effective public health policies. Chinese police have occasionally detained him for his work.

Wan said the government's decision was driven by the Geneva-based Global Fund, a group that fights AIDS, tuberculosis and malaria. It recently granted China US$5.8 million ( EUR 3.98 million) to fight HIV and AIDS.

The fund is holding a board meeting this week in the southwestern Chinese city of Kunming , and may have pressured the government to revise the law, Wan said.

China holds a seat on the board of the Global Fund, which has approved total funding of US$424 million ( EUR 290 million) to fight HIV/AIDS, tuberculosis and malaria in the country.

The World Health Organization welcomed the news Tuesday, saying it was a major step in fighting discrimination and will lead to a greater understanding of how HIV/AIDS is transmitted and prevented.

"Decisions like this show that the Chinese Government is continuing to make important progress in the fight against HIV/AIDS," said a statement issued by Joanna Brent, a WHO spokeswoman in China .

An estimated 650,000 people live with HIV in China, according to the most recent government statistics, dating from 2005.

China's southern borders with Myanmar, Thailand, and Laos, are hot spots for the spread of HIV through drug use, and increased levels of unprotected sex are spreading the disease across various sectors of Chinese society.