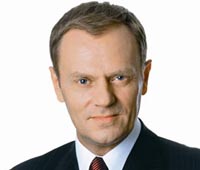 A new Polish premier Donald Tusk was empowered by President Lech Kaczynski on Friday to form a new government for Poland.

Tusk, 50, received the mandate in a brief ceremony at the Presidential Palace in downtown Warsaw. The two men shook hands and the president handed Tusk a red binder containing documents.

The two politicians made no comments before beginning private talks on the new government.

Tusk is the leader of the EU-friendly Civic Platform party that in Oct. 21 elections defeated the nationalist Law and Justice party of Prime Minister Jaroslaw Kaczynski, the president's twin brother.

Kaczynski's government will stay on until Tusk's Cabinet gets approval from the parliament, which is expected to happen this month.

With 209 seats, Civic Platform is short of a majority in the 460-seat Sejm, or lower house of Parliament, and is concluding coalition talks with the small centrist Polish People's Party, also known in the past as the Polish Peasants' Party. The two parties together have 240 seats.

Tusk, who has promised to improve ties with the EU, Germany and Russia and strengthen the alliance with the United States, said he will announce who is participating in his government next week - probably Wednesday, when the parliament convenes.

Jan Dziedziczak, a spokesman for the outgoing government, said premier Kaczynski has "cordially invited" Tusk to use an office at the premier's headquarters building for his coalition talks, which would be held in "comfortable conditions."

That was seen as a conciliatory gesture following years of rivalry between the two parties, which failed to form a coalition after the 2005 election, when Law and Justice narrowly won over Civic Platform.

Kaczynski then sealed a coalition with two small, unpredictable, populist parties, but the pact collapsed last summer, leaving him with a minority government and triggering elections just half way through a four-year parliament term.